Pro-Lifers in the Public Square (And a Lot of Them Too!) 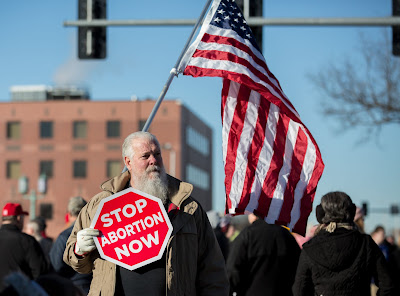 * It was, once again, a large crowd…something over 5000 people. Some might say this is an indication that the pro-life movement is riding the wave of a new enthusiasm. And while I would certainly agree, I would also point out that these public demonstrations against abortion have always brought out huge numbers, even in the darkest days of the aggressively pro-abortion administrations of Presidents Clinton and Obama. Of course, pro-life advocates are thrilled with the signs of moral progress in this critical battle -- the declining rate of abortion, the increased public awareness of Planned Parenthood’s barbaric crimes, the dramatic evidence of the preciousness of pre-born children as illuminated by medical technology and imaging, the political advances of the pro-life cause from the Donald Trump administration, and so on. However, it’s important to remember that pro-life Americans have been faithful to raise the banners of the sanctity of life even when these evidences were not so apparent.

* It was impressive to hear from so many of Nebraska’s political leaders and to hear them speak of very specific actions and legislative goals instead of giving the crowd the kind of tepid and too-often meaningless clichés we have hard before. The most important of the things spoken of on Saturday morning was the resolve of the pro-life politicians to work for the de-funding of Planned Parenthood. This is something that is long overdue from Nebraska leaders. So, many thanks to Gov. Ricketts, Lieutenant Governor Foley, Senators Sasse and Fischer, and Congressman Bacon and Fortenberry for joining us at the Walk...and making that pledge.

* There are always at these events several striking examples of media bias against the pro-life cause. That’s no surprise but it still should be noted as a great travesty. From grossly under-reporting the numbers involved…to ignoring the salient points made by pro-life speakers…to giving “equal time” (at least) to the minuscule scattering of pro-abortion protesters on hand…to often failing to even cover the pro-life event at all, and so on...the press shows itself again and again to be anything but fair, objective, and professional. However, another example of indefensible bias that I’ve noticed over the years is how carefully and devotedly the press avoids covering the screaming stridency of "pro-choice" agitators, the threats of violence they make (let alone the actual violence they have perpetrated), and the over-the-top profanity and blasphemy they use in their chants and signs. This gross indecency and mean-spirited fanaticism which is regularly displayed by the pro-abortion bullies is never shown, never reported, and never commented on by journalists.

* In Gov. Ricketts remarks, he mentioned three examples of citizen activity which demonstrate his contention that “Nebraska is a pro-life state.” Those three things were: visiting senior citizens in nursing homes, being involved in crisis pregnancy centers, and participating in prayer vigils. Claire and I couldn’t help but look at each other and smile because, of course, Vital Signs Ministries has been in the forefront of those ministries and heavily engaged in all three for decades now. And added to that is our involvement in sidewalk counseling at the abortion businesses, writing letters of advocacy and encouragement, speaking out in the public square, training and equipping other pro-life activists, and much more. So...way to go, Vital Signs Ministries!

* Finally, I want to express my thanks to all of those connected with Nebraska Right to Life who have worked so hard over the years to make the Walk for Life such a profoundly winsome and effective pro-life event. That would include Julie Schmit-Albin, Sandy Danek, Barb McPhillips, Chuck Conrad, Julie Lostroh, Shirley Lang, Brenda Eller, Brian Kimminau, Denise Ashby, and many others. Thank you all!

(The photo at the top, by the way, was taken by Jessica Moore for The Daily Nebraskan.)
Posted by DH at 10:37 AM