What Did Elijah, Moses, and Jesus Talk About? 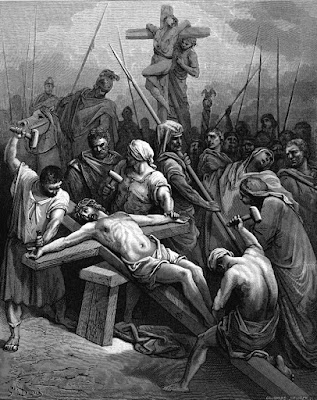 “So we are not to be surprised that Elijah and Moses, meet­ing with Jesus on the Mount of Transfiguration had this [Jesus upcoming crucifixion] as their key topic of conversation. ‘And behold there talked with him two men, which were Moses and Elijah; who appeared in glory, and spake (and continued to speak) of his decease which he should accomplish at Jerusalem.’

Of course they talked about it, because they had a stake in this. It was important for them not merely as a theological proposition, but the salvation of Moses and Elijah rested upon this single point — the coming death of Jesus on Calvary's cross. The disciples who were there that day had a stake in this too, because if Jesus had not died upon the cross they too would have had no salvation. And let us say to each one who reads this: we have a stake in this, for there is no salvation possible to us unless Jesus died on Calva­ry's cross.” (Francis Schaeffer, True Spirituality)

The wood engraving represented here is "Crucifixion" which Gustave Dore did in his illustrations for The Bible in London in 1866.
Posted by DH at 4:39 AM