Opie Taylor, Where Are You When We Need You? 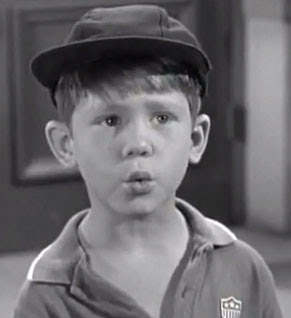 As if we needed yet another example of how self-involved, nerdy, and slavishly addicted to computer-generated amusement is American youth, along comes the phenomenon of Pokemon Go, the raging fad that promised to get kids out of doors yet still couldn’t get them out of their own heads. We shouldn’t be too surprised. After all, we have been allowing, even encouraging, kids to spend their leisure time (and they have plenty of it) plugged in first, to the television, then to videos, and then to even deeper psychological connections created by increasingly interactive smart phone games.

I thought about how stark a contrast Opie Taylor was to today’s American kids when I recently caught one of the reruns of The Andy Griffith Show. In this episode, aired originally in 1964, Opie found $50 alongside the road. After waiting the established period of one week, he was allowed to keep his treasure. Well, the primary lesson of the story concerned how willing Opie was to return the money to its rightful owner, even though he had the legal right to keep it. He wanted to do the right thing. The episode was typical of the show, emphasizing as it regularly did such moral values as kindness, fairness, humility, patriotism, courage, loyalty, good manners, and so on.

However, what I found most interesting about this particular program — and what seemed so dramatically unlike contemporary culture — was what Opie was considering doing with his money. He wasn’t thinking about Pokemon objects, computer games, video games, smart phone apps, iTune downloads, or graphic novels strong on violence, sexual images, and mysticism. No, Opie’s plan was to save most of the money (that’s pretty radical in itself) and spend the rest on one or more of the following: a bike, a baseball glove, an erector set, a football helmet, or what he finally decided on, a fishing pole. All involved wholesome, healthy, active, even intergenerational play. For Andy and Barney had already agreed to help with the erector set. And the show frequently featured Opie fishing with his friends and his father, playing ball with both as well.

I’ve thought about that program throughout the week, usually when I spot some kid walking along, head down, eyes fixed on the tiny screen of his phone. But I’ve also thought about Opie when I pass by ball fields and swimming pools that are empty of children, streets without bikes, sidewalks without skateboards, yards without kids playing tag, cowboys and Indians, or hide and seek.

Alas, all the kids are inside, luxuriating in the air conditioning and plugged into their electronic devices.

Opie Taylor, where are you when we need you?
Posted by DH at 5:38 PM