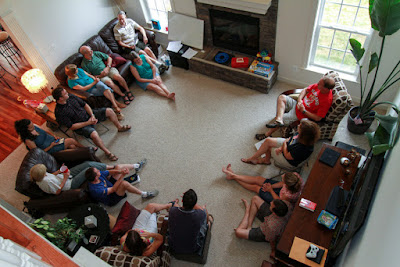 The matching game we have used with couples over many years has been a grand success. It has generated profitable discussion among couples and their friends. It has served to develop better understanding and appreciation. And it has been a lot of fun.

Why don’t you consider utilizing the questions we have created to use for an evening party, conversation starters with friends, or even as an exercise with you and your spouse. Here is a sample set of questions. For more, just contact us.

Questions for wives
1. Who was the more romantic during your courtship?
2. If you received $100 that was an unexpected gift, what would you use it for?
3. What was your husband’s favorite subject in high school?

4. If your husband had the choice of any occupation which would he choose?
5. What was the single most important factor which initially attracted you to your husband?
6. What is the complement which your husband most appreciates?

7. If your husband was suddenly announced as his party’s choice for the Presidency of the U.S., who would he choose for his running mate?
8. What was your favorite musical group in high school?
9. When your husband was a little boy (i.e. elementary school age), what was his answer to the question, “What do you want to be when you grow up?”

1.  When your wife is dressing for an evening out, which does she put on first – her dress or her makeup?
2. Who had the strictest upbringing?
3. What will your wife say was your most impressive accomplishment before you were married?

4. If your wife won a two-week, all-expense paid trip to any city in the world, where would she want to go?
5. What is your mother-in-law’s maiden name?
6. You have just climbed into bed at the same time as your wife when you both realized the kitchen light is still on.  Who gets up to turn it off?

7. Assuming an objective panel of observers could be found to examine both your and your wife’s driving habits, who would they select as the best driver?
8. Rabbits!  Would you rather A) hunt them?  B) study them?  C) ignore them?
9. You’ve invited someone special home for dinner.  What is your wife most likely to serve for the main dish?
Posted by DH at 8:38 AM