The Zek Who Changed the World 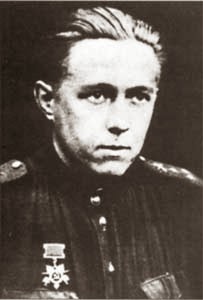 In 1962 the Soviet literary journal Novyi Mir published Alexander Solzhenitsyn's short novel, One Day in the Life of Ivan Denisovitch.

And the world changed.

The editor of the journal, Alexander Tvardovsky, knew that he had discovered in Solzhenitsyn an astonishing new writing talent, a man who brought to his art a courageous moral vision. Such a writer hadn't appeared in print in Russia since the days of Dostoevsky and Tolstoy. The Communists had destroyed art...and artists.

But there was something about this startling little book, written from the point of view of a prisoner in Stalin's gulags, that gave Tvardovsky enough hope to take the manuscript to the authorities and ask for permission to publish it. After all, Stalin was dead, the butcher who in his monomaniac savagery had murdered millions of his own people. And his eventual successor, Nikita Khrushchev, had his hands full trying to wrest control from Stalin's hard-line comrades in the Politburo. Khrushchev had already launched (within the private domains of the Soviet elite) his attack on the "cult of personality," a campaign to present Stalin as a paranoid dictator whose excesses had actually undermined the Glorious Revolution.

Of course, in going after Stalin's memory, Khrushchev was anything but the enlightened, progressive soul that liberals in the West first praised him as being. No, he was just another Communist thug who was anxious to develop his own power. Discrediting Stalin, even it meant exposing some of the ugliness of Soviet history, was merely another means to get a tighter grip on the Kremlin. And One Day in the Life of Ivan Denisovitch with its heart-rending portrayal of the senselessness and brutality of a Stalinist-era forced labor camp in Siberia written by a former zek (slave worker) who experienced it? Khrushchev figured that the novel would make an effective move in the next stage of his campaign, taking his attack on Stalin's "cult of personality" to the Soviet public and even to the peering journalists of the West.

But what Khrushchev, in his own spiritual blindness, could not foresee was how powerful a bomb he had set off when he gave Tvardovsky the permission to publish One Day in the Life of Ivan Denisovitch. For the Stalinists in the Kremlin proved harder to defeat than he imagined. Indeed, they raged against Kruschev for allowing even select horrors about the Soviet Union to be published. Instead of securing power, Khrushchev began to lose it.

Moreover, even the little scent of freedom that arose from the publication of the novel (and Solzhenitsyn's emergence as a respected dissident voice by the West) had an intoxicating effect on the Russian populace. Khrushchev had desired only a little light to shine...just enough to expose Stalin's treachery to the ideals of the Communist Revolution. What he got was a light that grew more brilliant and hot than he ever imagined, a light that revealed the utter wickedness and absurdity of Communism itself.

Khrushchev quickly realized his mistake and tried to reverse it with a complete suppression of Solzhenitsyn's work and reputation. He was too late. The comparatively mild light of Ivan Denisovitch would blaze up higher and higher with the more detailed, more searing revelations of Solzhenitsyn's subsequent books: The Gulag Archipelago, Cancer Ward, The First Circle, and so on.

Published in Western editions, Alexander Solzhenitsyn's work would become the single most reason behind the destruction of the Soviet Union's claims of a moral foundation. And when that began to weaken, other heroes of freedom (Ronald Reagan, Lech Walesa, John Paul II, Margaret Thatcher) would follow up to eventually eliminate the threat of Communist tyranny over Eastern Europe.

Re-reading One Day in the Life of Ivan Denisovitch recently was as thrilling as ever as I contemplated how God had used this small novel as a big voice for freedom. The soaring of the human spirit represented there is inspirational on many levels -- the clever sarcasm the author uses to engage the foolishness of the Soviet schemes is superb; the introduction of Alyosha presented the strongest Christian character that Russian literature had seen for three generations; and the passion for a detailed history of how the camps were run strongly foreshadows the full exposure Solzhenitsyn would produce in his later works.

All these elements of One Day in the Life of Ivan Denisovitch (and more) show the spiritual genius as well as the bold courage of Alexander Solzhenitsyn -- a humble zek who quite literally and grandly, changed the world.
Posted by DH at 5:48 AM