Christian Activism and the Code of Chivalry 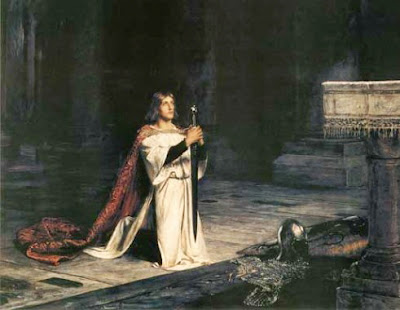 “Chivalry is only a name for that general spirit which disposes men to heroic actions, and keeps them conversant with all that is beautiful and sublime in the intellectual and moral world.”

That’s how Anglo-Irish writer Kenelm Henry Digby described chivalry in The Broad-Stone of Honour published in 1822.

It’s a nice description. But I like even more the way Sir Walter Scott put it when he had the charming and brave knight, Ivanhoe, answer a young woman’s question in this way:  “Chivalry?  Why maiden, she is the nurse of pure and high affection, the stay of the oppressed, the redresser of grievances, the curb of the power of the tyrant.  Nobility were but an empty name without her.  And liberty finds the best protection in her lance and sword.”

Chivalry. The word itself stirs the imagination and moves the soul to embrace manly virtues: strength, courage, a willingness to fight in a noble cause. But also kindness, innocence, courtesy and grace.  And we must not forget honor, self-discipline, loyalty, and a burning love for God.

In recent speaking engagements (three Christian men’s groups, a gathering of teenagers, a church congregation), I’ve dealt with these themes.  And in these talks, I do not treat chivalry as myth or literary legend.  I deal with the subject as a historian and Christian activist, emphasizing to my audiences that chivalry did not live only in the romances of King Arthur, Sir Roland, Robin Hood and others.  Chivalry was a hard fact. It was a set of ideals, to be sure, but ideals which were devoutly pursued by men very much from the real world.

Note, for instance, the vows of allegiance, holiness and service taken by those knights allowed into the Order of Bath early in the 12th Century.  “Brother, the king our Sovereign lord wills it that you take up this high and worshipful order, which as a knight I declare to you certain points... You shall love God above all things, be steadfast in faith, sustain the church, and be true to your sovereign lord.  Be true to your word and promises, be secure in this.  Also you shall sustain widows in their rights, anytime they require you, maidens in their virginity, helping them and succoring them in your good that they not be misgoverned for their own faults.  You shall sit in no place where an evil judgment should be wrongfully given to anybody, according to your knowledge.  You shall suffer no murderers, nor extortions of the people within the country where you dwell, but with your power you shall put them into the hands of justice, that they be punished as the king’s law requires.” (1128 AD)

Do these vows sound familiar to you?  They should because they illustrate how the honored code of chivalry was founded on something harder, older and more sublime. They come directly from Christianity.  Indeed, the knight of chivalry has his best model in the New Testament picture of the warrior-saint. Remember Ephesians 6?  2 Timothy 2:1-4?  And what of the wealth of Scriptures (Old and New Testament) that speak of purity of heart and body, courage, justice, mercy, graciousness of speech, service to the defenseless, humility, loyalty to the Sovereign King, and so on?

The Knights of the Round Table are the epitome of the chivalric heroes of the early medieval era. But the codes of chivalry they represented so wonderfully did not originate with them.  Rather, these ideals come from the pages of Holy Scripture.  And so too did the role models of chivalry: Moses, Joshua, Samson, Daniel, Gideon, David, the mighty men of valor, and yes, the apostles and other early missionaries of the Church.  All of these heroes could rightly be described as knights-errant with a devotion to God’s holy commands.  All were champions of those virtues which would, centuries later, be described as chivalry.  And those biblical ideals resound even louder than the vows taken by the Knights of the Bath. Here are a few examples:

“Wash yourselves, make yourselves clean; Remove the evil of your deeds from My sight. Cease to do evil.  Learn to do good.  Seek justice.  Reprove the ruthless.  Defend the orphan.  Plead for the widow.”  (Isaiah 1:16 & 17)

“Thus says the Lord, ‘Do justice and righteousness, and deliver the one who has been robbed from the power of his oppressor. Also do not mistreat or do violence to the stranger, the orphan or the widow; and do not shed innocent blood in this place.’”  (Jeremiah 22:3)

“Vindicate the weak and fatherless.  Do justice to the afflicted and destitute.  Rescue the weak and needy.  Deliver them out of the hand of the wicked.”  (Psalm 82:3 & 4)

“Pure and undefiled religion in the sight of our God and Father is this: to visit orphans and widows in their distress, and to keep oneself unstained by the world.”  (James 1:27)

“Deliver those who are being taken away to death, and those who are staggering to slaughter, Oh hold them back. If you say, ‘See, we did not know this,’ does He not consider it Who weighs the hearts? And does He not know it Who keeps your soul? And will He not render to man according to his work?”  (Proverbs 24:11 & 12)

You say that living out the chivalric code is a tough task?  No doubt about it.  But not too tough for men of God.  And that’s the key point I’ve been making in my talks about chivalry.  I want men to know that the codes of chivalry were real, that they were noble and exhilarating, and that they derive from Holy Scripture.  But the most important thing for them to understand is that the codes of chivalry are of the utmost relevance to them today!  They are certainly high ideals. But, just as certainly, they are do-able ideals.

You say you’re not worthy?  Jesus can take care of that.  He died to pay the penalty of  your sin and to create in you a clean heart.  His blood makes you worthy.  You say you’re not equipped?  Jesus has that covered too.  He offers His redeemed children the Holy Spirit, specific spiritual gifts, the powerful sword of the spirit which is the Word of God, and the fellowship of the Church.

Make no mistake; the exciting adventures of chivalry are not all in the past.  They’re right here, right now.  And God is looking for those who will simply answer the call.  Whether you are a carpenter or a clerk or a cook or a clergyman, whether you work in an office or a factory or a warehouse or a hospital, whether you’re retired or in school or unemployed or in prison, the chance to be a knight of the Cross who joyfully embraces the code of Christian chivalry is there for any man on the planet.  And, for that matter, any woman too.

Think what a rebirth of chivalry in America would do for marriages.  For parenting.  Think what it would do to such demonic wickedness as abortion.  Think what would happen if instead of anti-heroes, hip hoppers and dopey sit-com dads, there were Christian knights full of integrity, courage, wisdom, and a love of God whom young men could look to as role models.

Consider with me just a few timely possibilities.  What would have happened if Christian men around the Omaha area (Christian men by the hundreds and thousands) would have called or written Ralston Arena officials and protested their plans to bring in the Lingerie Football League? And what if those thousands of Christian men would have contacted the Omaha City Council over the sexual deviancy proposal that came up earlier this year?  Or the Omaha Public School Board when it spent thousands of tax dollars to force employees to undergo indoctrination on matters of sexual deviancy and anti-Americanism?  Would these outrageous actions have succeeded had Christian men calmly, simply, but resolutely stood against them? Not a chance.

Therefore, when one considers such examples of moral failure, one is tempted to conclude, as Edmund Burke did in the 19th Century, that the age of chivalry is dead and the glory of Christendom extinguished.  But I, for one, will not accept that.  For the Scripture is quite clear as to our responsibilities to be salt and light in a decadent culture.  Indeed, God desires us to be part of His triumphal procession (2 Corinthians 2) as we serve as warrior-knights  -- wearing His armor, wielding His sword, and displaying a confident willingness to engage the enemy.  Thus we overcome in our personal struggles, in the culture wars and even in those battles being waged in the heavenlies.

“Chivalry,” said Ivanhoe. “Why maiden, she is the nurse of pure and high affection, the stay of the oppressed, the redresser of grievances, the curb of the power of the tyrant.  Nobility were but an empty name without her.  And liberty finds the best protection in her lance and sword.”

So, what do you say, guys? There are before us holy quests to fulfill, innocent citizens to rescue, and plenty of dragons to slay. Let’s saddle up.

(The painting at the head of the essay is “The Vigil” by John Pettie. Exhibited first in 1884, it is part of the Tate Collection.)
Posted by DH at 5:23 AM