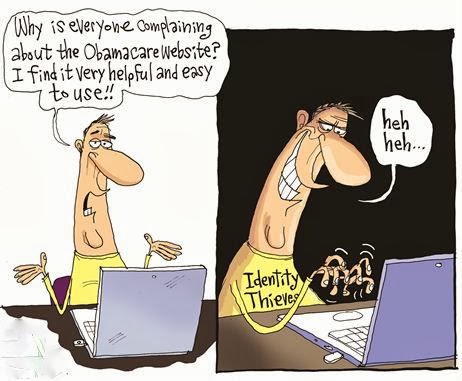 Do you think it's important that the American public be informed that the ObamaCare website remains a cybercriminal's dream?

Yeah, I do too. But don't expect the networks or wire services to bother with such things. Indeed, except for Fox News and the alternative media of talk radio and cyberspace, real news about what's happening in the U.S.A. is provided by...British newspapers.

A man who was once the FBI's most wanted hacker says Healthcare.gov is a cybercriminal's dream.

Kevin Mitnick has been a legend in the hacking world since his 1990s heydays, but he's now playing for the good guys and sent a dire message to a congressional security panel on the ObamaCare website on Thursday.

“It's shameful the team that built the Healthcare.gov site implemented minimal, if any, security best practices. It's clear that the management team did not consider security as a priority.”

Mitnick was backed up by CEO of consulting firm TrustedSec LLC David Kennedy.

HealthCare.gov is the consumer web portal to a 36-state federal health insurance marketplace, which offers private insurance, with federally subsidized rates for some consumers. The 14 other states have built their own marketplaces.

Kennedy said 'nothing has really changed' since a hearing of the same committee in November, when he and three other expert witnesses said they believed the site was not secure and three of them said it should be shut down immediately.

“I don't understand how we're still discussing whether the website is insecure or not,” said Kennedy, who worked for the National Security Agency and the U.S. Marine Corps before entering the private sector. “It is insecure -- 100 percent.”
Posted by DH at 10:28 AM