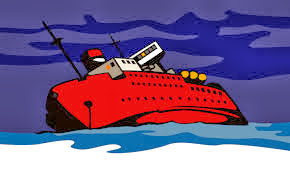 President Obama’s brain trust on Afghanistan does not know much the U.S. spends on the war each year or the American cost in lost lives on the battlefield.

This embarrassing lack of basic knowledge from State Department and Pentagon experts on Afghanistan at a House hearing Wednesday prompted even a Democrat to say he was stunned.

Good grief.  With Barack Obama at the helm, our ship of state is not only dangerously drifting, but from stem to stern it reeks of incompetence, inefficiency and arrogance.

I'm afraid it's time for the women and children to make their way to the lifeboats.
Posted by DH at 9:34 AM