The Mayflower Compact (In Modern English) 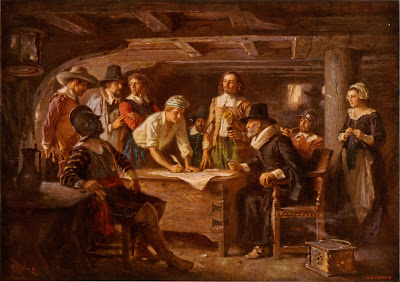 As you remember from your history classes (I hope), the Mayflower Compact represents our nation's earliest and one of its most important documents.  It was drawn up by the party of Pilgrims who had crossed the Atlantic Ocean seeking religious freedom and the opportunity to spread the gospel. The covenant was made while they were still aboard the ship and was signed on November 11, 1620 (Old Style date) in what is now Provincetown Harbor near Cape Cod.

Having landed at Plymouth (named by Captain John Smith), the Pilgrims realized that they had ended up in a region that wasn't charted by the London Company. They also understood that earlier settlements in the New World had failed because of a lack of proper government. Thus, the Mayflower Compact was a critical social/religious contract in which the settlers consented to follow the rules and regulations of a government that would derive its power from the consent of the governed.

The best reading of the Mayflower Compact includes Governor William Bradford's description of the circumstances just prior to the signing, "This day, before we came to harbour, observing some not well affected to unity and concord, but gave some appearance of faction, it was thought good there should be an association and agreement, that we should combine together in one body, and to submit to such government and governors as we should by common consent agree to make and choose, and set our hands to this that follows, word for word."

And then the compact itself:

In the name of God, Amen. We, whose names are underwritten, the loyal subjects of our dread Sovereign Lord King James, by the Grace of God, of Great Britain, France, and Ireland, King, defender of the Faith, etc.

Having undertaken, for the Glory of God, and advancements of the Christian faith and honor of our King and Country, a voyage to plant the first colony in the Northern parts of Virginia, do by these presents, solemnly and mutually, in the presence of God, and one another, covenant and combine ourselves together into a civil body politic; for our better ordering, and preservation and furtherance of the ends aforesaid; and by virtue hereof to enact, constitute, and frame, such just and equal laws, ordinances, acts, constitutions, and offices, from time to time, as shall be thought most meet and convenient for the general good of the colony; unto which we promise all due submission and obedience.

In witness whereof we have hereunto subscribed our names at Cape Cod the 11th of November, in the year of the reign of our Sovereign Lord King James, of England, France, and Ireland, the eighteenth, and of Scotland the fifty-fourth, 1620.
Posted by DH at 12:28 PM