Barack Obama: Where Did Those Superhuman Smarts Go To? 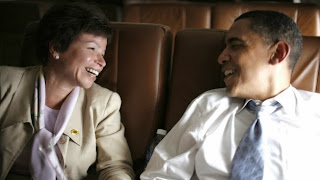 Valerie Jarrett, Barack Obama's intimate friend and adviser of longstanding, was quoted by David Remnick, editor of the New Yorker, in his 2010 biography of Obama, The Bridge: The Life and Rise of Barack Obama, as saying, "I think Barack knew that he had God-given talents that were extraordinary. He knows exactly how smart he is…He knows how perceptive he is. He knows what a good reader of people he is. And he knows that he has the ability -- the extraordinary, uncanny ability -- to take a thousand different perspectives, digest them and make sense out of them, and I think that he has never been challenged intellectually...He’s been bored to death his whole life. He's just too talented to do what ordinary people do.”

After several years of a miserably flailing presidency, one in which Mr. Obama regularly denies responsibility for (indeed, even knowledge of) such major matters as national defense, national security, national diplomacy, the economy, the workings of Congress, the facts of history, the details within his own legislative agenda, the precepts of the U.S. Constitution, the biological origins of life and other things that are "above his pay grade," one wonders if Ms. Jarrett's opinion about her boss' grand intellectual talents remain in place.

I'm not saying that it's impossible -- the naivete and wishful thinking powers of the left are quite remarkable. But the self-delusion necessary to still believe in Barack Obama as an extraordinarily talented thinker would tax even Ms. Jarrett's abilities.
Posted by DH at 10:44 AM