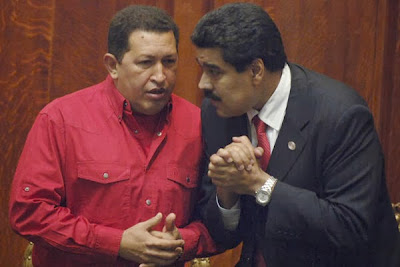 Socialism is a dead end -- always has been. But wishful thinking progressives just can't seem to learn the lessons of history until, like the people of Venezuela, they see that the vaunted rhetoric and coercive planning of socialism yields narcissistic tyrants who see ghost birds...but not fresh food, clean water or toilet paper.

Below are excerpts from Alasdair Baverstock and Hannah Strange, "As socialist dream crumbles, Venezuelans find Nicolas Maduro 'a bad copy' of Chavez," The Telegraph.

...Despite sitting on the world’s largest oil reserves, Venezuela’s socialist government can’t quite manage to keep the lights on. Now many in Venezuela are wondering how much longer President Nicolas Maduro, the anointed successor of the country’s firebrand Leftist leader Hugo Chavez, can keep hold of the reins of its crumbling socialist revolution...

Official inflation has soared above 45 per cent - 55 per cent for groceries - basic product shortages leave entire families without food and widespread power outages are commonplace. Meanwhile the South American country is witnessing an average of 71 homicides every day, one of the highest murder rates in the world.

“This country is a thousand times worse than it was six months ago”, said Pedro Sosa, a Chavez supporter who voted for Mr Maduro but now regrets having done so. “Choosing Maduro as his successor was a mistake (by Chavez),”said Veronica Tapia, 22, a student at the Caracas Institute of Finance.

In one Kafka-esque example of state inefficiency, a Reuters investigation recently found that three new oil tankers unveiled with flags and confetti in the last 14 months were still sitting in their shipyards, never having set sail despite their multi-million dollar price tags.

The desperate scramble for necessities is increasingly spilling over into violence. At the end of last month, a lorry driver was crushed to death by looters as they scrambled to steal his cargo on a Caracas motorway. In the eastern city of Ciudad Bolivar, a man died as a mob clamoured for a bottle of oil and a loaf of bread at a state-run supermarket...

Mr Maduro has tried to capitalise on the almost cult-like devotion to his predecessor, declaring himself the “son of Chavez” and attempting to emulate his thundering rhetoric. He has related on national television how he often sleeps in the late president’s mausoleum. He has even, he claims, been visited by the spirit of Chavez in the form of a small bird.

But his excuses - he has in six months alleged 13 conspiracies against his government and four assassination plots against himself - are starting to ring hollow..