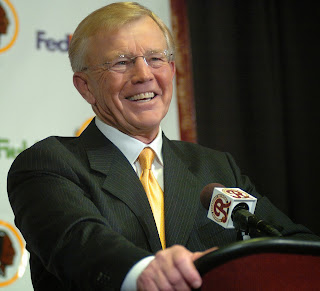 So what is NFL legend, NASCAR powerhouse and outspoken Christian Joe Gibbs up to this fall? Check it out.

Joe Gibbs is one of those rare men who has reached the mountaintop in not one, but two hyper competitive sports. He took the Washington Redskins to the Super Bowl four times and went 3-1 in the big game, knocking off the Dolphins, Broncos and Bills. Then he hung up the whistle and created Joe Gibbs Racing, where he's won three championships in NASCAR's elite series. This year, with only eight races remaining, the top two cars in NASCAR's Chase for the Sprint Cup Championship are JGR teams.

Indeed, on this particular Monday evening, he's barely 15 hours removed from a NASCAR celebration in Chicago, where JGR's Matt Kenseth won the first race of the Chase. Yet here's Gibbs, alongside his sons J.D. and Coy, coaching youngsters on the finer points of handoffs and snap counts.

"These are kids in fourth and fifth grade, they have no idea what he did," J.D. Gibbs, now president of JGR, says of his father. "It's just great to see him engage with these kids."

So what brought Gibbs back to the field? One word: family. He's got quite a few grandsons, and as they reach football age, Gibbs spends a few seasons giving them some lessons from the master...
Posted by DH at 9:21 AM