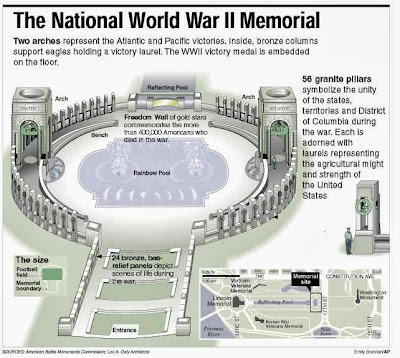 You probably know by now about the WW II vets who placed aside the barriers set around the outdoor arena of the World War II Memorial in Washington D.C. -- barriers which indicated the place was closed because of the Democrats' foolish and mean-spirited "shut down" of the federal government.

...Many elderly veterans, some in wheelchairs, broke through the barriers set up around the memorial, as police, park service employees, and tourists looked on. "The Germans and the Japanese couldn't contain us. They weren't going to let barriers contain them today. They wanted to see their memorial," says Armstrong.

Honor Flight of Northwest Ohio has a trip scheduled to depart from Toledo next Wednesday, October 9.

"We will make the call this Friday to determine if the flight is still a go, or if we will have to re-schedule," Armstrong explains.

He says they are considering going ahead with the trip even if the government is still on shutdown, but when he called the parks service, he was told they would face arrest. "I said, are you kidding me? You're going to arrest a 90/91-year-old veteran from seeing his memorial? If it wasn't for them it wouldn't be there.

When Armstrong asked for her name, he says she did not give it to him and then promptly hung up the phone...

The White House and the Department of the Interior rejected a request from Rep. Steven Palazzo’s office to have World War II veterans visit the World War II memorial in Washington, the Mississippi Republican told The Daily Caller Tuesday.

Palazzo helped the veterans commit an act of civil disobedience against the Park Service Tuesday, when the heroes stormed through barricades around the closed memorial...

Palazzo’s office was in touch with the heads of the National Park Service, the Department of the Interior and the Capitol Police. He says all these officials rejected his request to allow the veterans, many of whom are octogenarians and some of whom are in poor health, to attend.

Palazzo, a Gulf War Marine veteran who has participated in all five of the Honor Flights, blames the White House for making it harder on veterans and playing politics. “At first I thought it was a huge bureaucratic oversight,” Palazzo told The Daily Caller, “but having talked with the officials I can’t help but think this was politically motivated. Honor Flights, which bring WWII veterans to the nation’s memorials, are planned a year in advance and cost anywhere between $80,000 to $100,000. How low can you get with playing politics over our nation’s veterans?”

In a statement, Palazzo noted that he is introducing legislation to ensure that all Honor Flights are granted access this week. “This is an open-air memorial that the public has 24/7 access to under normal circumstances — even when Park Service personnel aren’t present,” Palazzo said in the statement. “It actually requires more effort and expense to shut out these veterans from their Memorial than it would to simply let them through. My office has been in touch with NPS officials and the Administration to try to resolve this issue.”

Senator Rand Paul weighed in too.

Sen. Rand Paul blasted the federal government for trying to block World War II vets from visiting their memorial, saying “some idiot in government sent goons out there to set up barricades.”

“If Harry Reid and the President want to keep the parks closed — I mean did you read the story today? Some idiot in government sent goons out there to set up barricades, so they couldn’t see the monument. People had to spend hours setting up barricades where there are never barricades to prevent people from seeing the World War II monument because they’re trying to play a charade,” Rand (R-Ky.) said Tuesday on Fox News’s “Hannity.”
Posted by DH at 10:23 AM