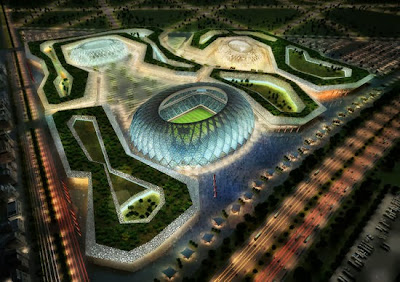 Could the ultra-extravagant, ultra-expensive construction projects for the 2022 World Cup in Qatar end up costing human lives? Indeed, hundreds, even thousands of human lives? That's the fear of the International Trade Union Confederation which claims the massive scheme involving stadiums, hotels, and related structures will be built by what amounts to slave labor working under extremely dangerous conditions.

Indeed, based on the current deplorable conditions (44 Nepalese workers forced to labor in 120 degree heat without access to water died in just one month last summer), the ITUC is projecting a lot worse to come as over a million new workers will be brought into the country. "The ITUC estimates that of the hundreds of thousands of workers flowing into the country from countries such as Nepal, India, and Sri Lanka to labor on building sites, as many as 600 a year could die, absent reforms to harsh working conditions and unsanitary living quarters."

“The allegations suggest a chain of exploitation leading from poor Nepalese villages to Qatari leaders,” the Guardian concluded. “The overall picture is of one of the richest nations exploiting one of the poorest to get ready for the world’s most popular sporting tournament.”

“There is no longer a risk that the World Cup might be built on forced labor,” said Aidan McQuade, director of Anti-Slavery International. “It is already happening.”

Below is the letter I'm sending to the Qatar consulate in Washington, D.C. And, for those of you who would like to join in this chorus (and I certainly hope there is a chorus), you'll find the address of the embassy below too.

After reading recent articles in the Guardian, National Review and other sources which spoke of the deplorable conditions in which immigrant laborers from Nepal, India, and Sri Lanka are forced to endure while working on construction projects in Qatar, I decided to write and express my deep sadness and disappointment to someone who might be able to effectively intercede. So, please do what you can to pass on to officials in your country the desperate need to improve conditions among these workers. Better sanitation. Better oversight. Safer conditions. And appropriate freedoms and protection.

To do so is an important, perhaps life-saving grace to the workers. But it is also a way to elevate Qatar's reputation among the nations, to avoid the international scandal that is now brewing and which will only receive more attention as the World Cup nears.

Thank you for considering my sincere request.