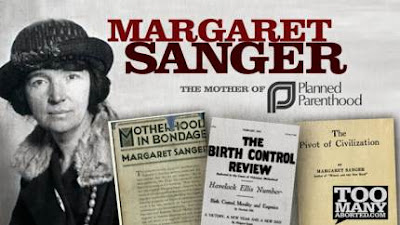 This past weekend Planned Parenthood celebrated the birthday of their founder, Margaret Sanger. And though Sanger was, as proven by her own writings, an alarmingly outspoken racist, elitist and eugenicist, the organization she started continues to honor her.

Worse still, however, is that Planned Parenthood, the largest abortion business in the world, continues to apply Sanger's mean-spirited doctrines.

Amazing? Disgusting? Yes to both. But the most pressing question is why the American public doesn't know the truth about Sanger and the radical abortion business which Planned Parenthood has become.

And that's where you and I come in; namely, to awaken our friends and neighbors to those plain and terrible facts about Sanger and her mega-abortion corporation -- facts that the liberal media has kept well-hidden.

Here at Vital Signs Blog we frequently provide you with just the information you need for this task. For instance, among the recent posts you'll find of use are:

Here's 9 Things About Planned Parenthood Everyone Should Know

Despite Media Cover, Planned Parenthood's Scandals Are Hurting the Brand and

And for more, you can scan all the posts which appear under the heading of "Planned Parenthood" on the right sidebar.
Posted by DH at 8:54 AM