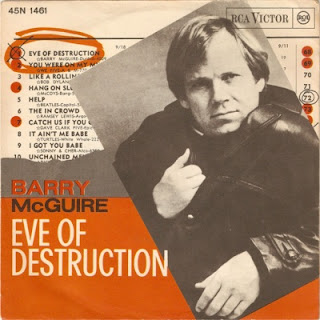 Remember Barry McGuire's musical question, "And you tell me over and over again, my friend, you don't believe we're on the eve of destruction?"

Here's just a few examples from the morning's news that show how inescapably relevant Barry's question is in the fall of 2013.

* High school students in Tennessee doing a three-week course on world religions have been taken to a Hindu temple and to a mosque -- where they were given cookies, a lecture on Islam, and copies of the Koran. But no field trips were allowed to a church or synagogue. In fact, the whole course was heavily biased in favor of Islam. Also, students who protested the heavy-handed and unfair policy were harshly punished. (Read the details in this Todd Starnes column.)

* Proudly citing their introduction of Jackie Robinson to manor league baseball and being "on the right side of history, " the Los Angeles Dodgers have announced their first Lesbian, Gay, Bisexual, Transgender Night OUT event on September 27 when they play the Colorado Rockies. Other teams have hosted similar "outings" including the Boston Red Sox, Houston Astros, Minnesota Twins, and San Francisco Giants.

* "Suki L. Handly was convicted of prostitution, drug possession, and larceny in the late ’90s. In 2008, the state of Connecticut hired her to dispense welfare, and what followed was...exactly what you’d expect, actually." (Jillian Kay Melchior, "Connecticut Hires Ex-Hooker to Dispense Welfare, Predictable Results Ensue," NRO)