Barack's Bad Habit? It's Not Smoking, It's Lying. 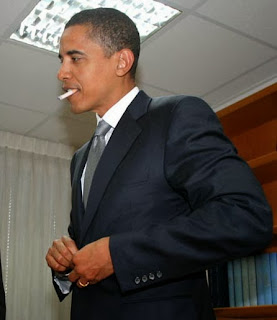 It seems that Barack Obama was caught telling a lie to Maina Kiai, the U.N. Special Rapporteur on human rights, about not having a cigarette in 6 years. Here's Charles C. Johnson's story in the Daily Caller.

It is, of course, just the kind of thing the press would zoom in on -- if the lying President were a Republican.

But since he's not, the press ignores this lie just as carefully as they have avoided honest and thorough reporting of any of Mr. Obama's other lies.

And much bigger lies they have been too -- like Benghazi, runaway government spending, vote fraud, ObamaCare, the IRS, Planned Parenthood, energy, executive orders, the economy and jobs, regularly breaching the Constitution, and so on.

That's a lot of lies. But, thanks to the diligent know-nothingness of Barack Obama's compliant press, they've all gone the way of the president's Marlboros -- up in smoke.
Posted by DH at 9:40 AM