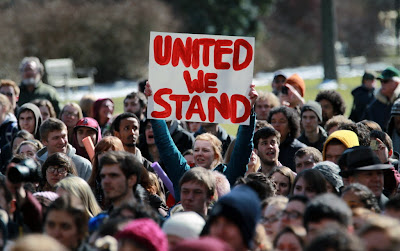 Do you remember Oberlin College canceling classes last February in
order to hold special "teach-ins" to deal with the outbreak of racist and anti-Semitic screeds which had suddenly started to appear on campus?

The thing got a lot of national attention; indeed, it prompted news stories, commentaries and copycat seminars around the country. For if menacing, ugly attitudes of this kind could occur at a school with such an ultra-liberal history as Oberlin, it must be proof that racism was on the rise and in need of massive government response.

Well, it turns out that the whole thing was a hoax.

And, even more disturbing, it was a hoax that was perpetrated by a couple of students who are zealous supporters of President Barack Obama.

In fact, one of the fellows was the founder and former president of the Ithaca High School for Obama Club, a member of the Oberlin College Democrats, and a self-described “atheist/pacifist/environmentalist/libertarian socialist/consequentialist" who organized a voter registration drive on behalf of Barack Obama.

Hmm. Does the progressive version of "community organizing" now include putting up signs featuring swastikas, the N-word and threatening messages in the dead of night?

But wait; the second remarkably disturbing item is even worse.

It seems that Oberlin officials (and even the local cops) knew the identity of the yahoos behind the signs, graffiti, and threats -- and said absolutely nothing! They allowed the circus to roll on as if the whole despicable campaign was real.

And even now, when the facts are known about this vicious hoax, where are the mainstream media reports? They are very, very few.

So for the real dope on these Oberlin dopes, you've got to go to articles like "The Great Oberlin College Racism Hoax of 2013" (William A. Jacobson at the blog Legal Insurrection) and "Meet the privileged Obama-supporting white kids who perpetrated cruel Oberlin race hoax" (Chuck Ross, Daily Caller).