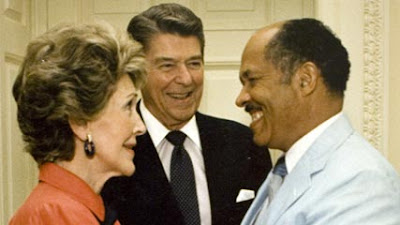 Thinking about seeing "The Butler"?

For the sake of honor and truth, please avoid plonking down good money to see a really bad movie. Don't let Hollywood play you for a sucker by manipulating your mind with a truly mean-spirited distortion of the Reagan White House.

Instead, read this review of someone who was there -- Ronald Reagan's son, Michael.

There you go again, Hollywood.

You’ve taken a great story about a real person and real events and twisted it into a bunch of lies.

You took the true story of Eugene Allen, the White House butler who served eight presidents from 1952 to 1986, and turned it into a clichéd “message movie.”

Guess which one grew up in segregated Virginia, got a job at the White House and rose to become maître d hote, the highest position in White House service?

Guess which one had a happy, quiet life and was married to the same woman for 65 years? And who had one son who served honorably in Vietnam and never made a peep of protest through the pre- and post-civil rights era?

Guess which butler feels the pain of America’s racial injustices so deeply that he quits his White House job and joins his son in a protest movement?

And guess which butler has a wife (Oprah Winfrey) who becomes an alcoholic and has a cheap affair with the guy next door? (I’m surprised it wasn’t the vice president.)

After comparing Hollywood’s absurd version of Eugene Allen’s life story with the truth, you wonder why the producers didn’t just call it “The Butler from Another Planet.”...

The real story of the White House butler doesn’t imply racism at all. It’s simply Hollywood liberals wanting to believe something about my father that was never there...

But facts don’t matter to Hollywood’s creative propagandists. Truth is too complicated and not dramatic enough for scriptwriters, who think in minute terms, not the big picture, when it comes to a conservative.
Posted by DH at 9:10 AM