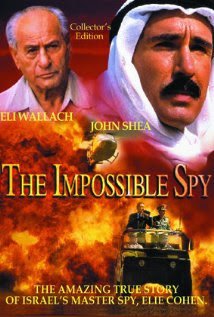 With the headlines filled with war in the Middle East, Syria, the Muslim Brotherhood, Arab nationalism, the vulnerability of Israel, and so on, Claire and I decided late last night to watch (via Amazon at $1.99) "The Impossible Spy," a movie made for the BBC by Harvey Chertok in 1987. The film, which starred John Shea and Eli Wallach, was at the time the largest film production in Israel and it remains to this day the BBC's best-selling movie.

The film depicts the true story of Eli Cohen, an Egyptian-born Jew who became one of Israel's most important spies. Indeed, the secrets he obtained became crucial in Israel's victory in the Six Day War of 1967.

The film, except for a couple of a details, is remarkably accurate and was approved by Mossad and by Cohen's widow.