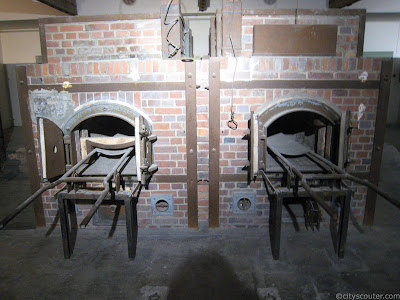 Chancellor Angela Merkel was expected to warn Europeans about the dangers of right-wing extremism Tuesday as she visited the former Nazi concentration camp at Dachau - but drew criticism for doing so during an election campaign.

She will become the first incumbent German chancellor to visit the site, hours ahead of an evening election rally in a beer tent in the nearby Bavarian city of Munich.

She is scheduled to give a short speech, tour the site museum, lay a wreath and meet with a small group of survivors.

"I know that this will not be an easy visit," she said in her weekly podcast ahead of the trip. The visit would be conducted with a sense of "shame and dismay," she said...

Not surprisingly, political opponents of the Chancellor are being boorishly critical of the visit. They insist that it's all a stunt to win votes. But in failing to show proper respect and appreciation for the visit to a concentration camp (an extremely rare thing for German politicians), the public cannot help to see that it is Merkel's critics who are playing politics here.

It's a bad show on their part. Indeed, Chancellor Merkel is making the visit at the express invitation of Dachau officials, including 93-year old survivor Max Mannheimer, the president of the committee of former prisoners.

"Mrs. Merkel's visit sends a strong signal, reflecting the estimation for the survivors and the work of the memorial site," said Dr. Gabriele Hammermann, director of the Dachau commemoration site.

"The chancellor is making good for the necessary attention that her predecessors neglected in the past," he added.

While former chancellor Helmut Kohl visited the former concentration camp of Bergen-Belsen with US president Ronald Reagan in 1985 and Merkel visited Buchenwald with President Obama in 2009, no German chancellor has ever been to Dachau in the past.
Posted by DH at 10:57 AM