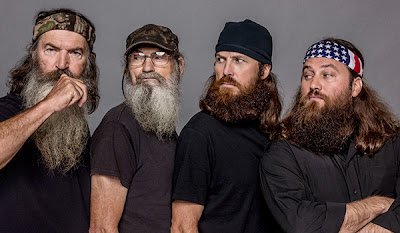 Here's a couple of Duck Dynasty reviews you'll want to read through -- and watch.

Like those 3:00 am wake up calls to join my dad duck hunting in the canoe before the school day began, it's time our politicians wake up and hear some Duck calls from far outside the beltway. The self-made, hugely successful businessmen (and women) of Duck Dynasty made history this week with the "most watched non-fiction series" in TV history. What's most interesting and inspiring is to see the number of young people tuning in to watch this all-American, hard working family -- and learn the key to their success (as well as tips on how best to bag the ducks!).

Todd and I had a great time meeting Duck Commander Willie Robertson at this year's NRA convention. And just the other day, Phil Robertson offered some of their refreshing trademark plainspoken talk that so many crave from our leaders in Washington. Speaking on the issue of the sanctity of life, Phil reminds us that all life is God-given, no matter how small or how special. Watch Phil's entire remarks on the abortion culture here.

To our GOP leaders in Washington, especially -- this is what Americans desire and deserve; we're not rooting for your social truces. As Phil so rightly asks, "What in the world has happened to us?"

Kudos to these Duck dudes for speaking their minds, and for their boldness in living the American dream of LIFE, liberty, and the pursuit of happiness -- reminding us all that it's only with freedom that anything is possible.

And the second Duck Dynasty review I want to point out is "Til Duck Do Us Part" written by Lee Habeeb and published over at NRO.

The backwoods reality show Duck Dynasty drew 11.8 million viewers, which happens to be the most ever for a nonfiction telecast on cable television…

How did this show about a bunch of bearded men dressed in camo who spend some of their time making high-quality duck calls, and the rest goofing off, beat those shows that media critics swoon over endlessly?

It’s simple. Duck Dynasty didn’t spring from the head of some screenwriter in New York or Los Angeles. It isn’t dark or cynical or ironic. It’s earthy and optimistic and light-hearted and funny, like the Robertson family itself. Like America itself.

That each show ends around the family dinner table with three generations sitting side by side, with the meal blessed by the family patriarch, makes Duck Dynasty different from anything else on TV…