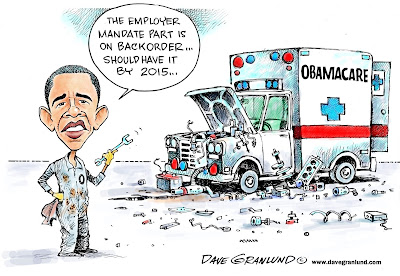 Bottom line: Let's delay and rewrite this ill-conceived law. Congress need not start from scratch. Lawmakers can build on what all of us have learned from three years of painful trial and error. Three years of attempting, but failing, to make this clumsy monstrosity work for the American people.

That's the concluding paragraph of Sunday's editorial from the Chicago Tribune. Pretty strong stuff, huh? But then ObamaCare has proven to be so unfair, so expensive, and so doggone unworkable that even some members of the mainstream media are beginning to come round.

And that concluding paragraph wasn't all the Trib had to say. Here's a bit more of that editorial which, by the way, was entitled, "How President Obama is flouting Obamacare."

...The Affordable Care Act, aka Obamacare, is a hugely complex law that sets up online health insurance marketplaces, requires people to have coverage or pay penalties, and doles out subsidies and incentives to nearly everyone in health care. Doctors, hospitals and insurers have spent large sums to gear up for its requirements. Employers are mulling: Hire? Fire? Cut workers' hours?

Millions of Americans, that is, stand to gain or lose from how this law is enforced — with the Obama administration bending that enforcement in ways that test, and arguably exceed, the boundaries of lawful conduct.

Every time the White House undercuts one provision of Obamacare, there is a massive ripple effect on other provisions. It's generally a zero-sum game: When someone gains, someone else loses. Example: When employers are relieved of their mandate to provide insurance, taxpayers risk having to subsidize more of those companies' employees.

The administration asserts that it can make these changes under the president's broad executive authority. Yet critics make a compelling argument that the president is stretching the limits. Former federal appellate Judge Michael McConnell, director of the Constitutional Law Center at Stanford Law School, writes in The Wall Street Journal about a different sort of mandate: the mandate in Article II of the Constitution that the president "'shall take Care that the Laws be faithfully executed.' This is a duty, not a discretionary power. ... As the Supreme Court wrote long ago (Kendall v. United States, 1838), allowing the president to refuse to enforce statutes 'would be clothing the president with a power to control the legislation of Congress, and paralyze the administration of justice.'"
Posted by DH at 10:23 AM