Transnationalists Have a Wonderful Plan for Your Life (And They Will Make Sure You Follow It!) 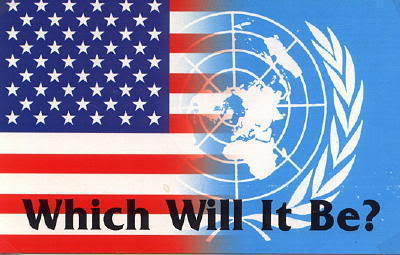 If you thought the very idea of a sovereign republic (not to mention, your personal freedom) was under attack by judges, Nanny State bureaucrats, and United Nations busybodies, I hate to tell you this but...you're right.

Globalism is passionately alive. And aided most willingly by the Obama administration, this transnational movement is growing by leaps and bounds.

Below are several excerpts from an alarming article published in the Wall Street Journal over the weekend, "American Sovereignty and Its Enemies." Written by Sohrab Ahmari, the article depends heavily on an interview with former Senator and veteran conservative, John Kyl. It is an article that deserves careful reading.

Proponents call this movement "legal transnationalism," and as Mr. Kyl writes in a recent Foreign Affairs magazine article (co-authored with Douglas Feith and John Fonte of the Hudson Institute), "the idea that a U.N. official can sit in judgment of the U.S." is one of its main innovations. Transnationalists want to rewrite the laws of war, do away with the death penalty, restrict gun rights and much more—all without having to win popular majorities or heed American constitutional limits. And these advocates are making major strides under an Obama administration that is itself a hotbed of transnational legal thinking.

"Transnationalists are a group of people who are convinced they are right about important issues," Mr. Kyl says as we sit down for a chat at the plush Washington office of the law firm Covington & Burling, where the 71-year-old Arizona Republican has served as an adviser since leaving the Senate in January. "But they are in too much of a hurry to mess with the difficulties of representative government to get their agenda adopted into law—or they know they can't win democratically. So they look for a way around representative government."…

Take Cedaw. If the Senate ever ratifies this piece of "1970s feminism preserved in diplomatic amber," as one commentator described the treaty, the U.S. would become subject to oversight by a Geneva-based committee that requires signatory states to, among other things, "achieve a balance between men and women holding publicly elected positions"; "ensure that media respect women and promote respect for women"; and "modify the social and cultural patterns of conduct of men and women, with a view to achieving the elimination of . . . stereotyped roles for men and women….

To be clear, transnationalism isn't a conspiratorial enterprise. In the legal academy, its advocates have openly stated their aims and means. "International law now seeks to influence political outcomes within sovereign States," Anne-Marie Slaughter, then dean of Princeton's public-affairs school, wrote in an influential 2007 essay. International law, she went on, must expand to include "domestic choices previously left to the determination of national political processes" and be able to "alter domestic politics."

The preferred entry point for importing foreign norms into American law is the U.S. court system. The Yale Law School scholar Howard Koh, a transnationalist advocate, has written that "domestic courts must play a key role in coordinating U.S. domestic constitutional rules with rules of foreign and international law." Over the past two decades, activist judges have increasingly cited "evolving" international standards to overturn state laws, and Mr. Koh has suggested that foreign norms can be "downloaded" into American law in this manner…

…President Obama has given them [transnationalists] an opening to shape U.S. policy. Ms. Slaughter and Mr. Koh held top posts at the State Department during Mr. Obama's first term, and their tenures coincided with an aggressive push to ratify or recognize as customary law Cedaw and a host of other progressive causes.

For proof that the transnationalist threat isn't merely theoretical, look no further than the European Union. Says Mr. Kyl: "What they have now is a situation where their sovereignty has largely been supplanted by others who are not accountable to voters in individual European countries."

It was in Europe where these ideas were first implemented, and it is to the EU that transnationalists look as a model. Today over half of the regulations that affect Europeans' lives are made by administrators in Brussels, not by national legislatures.

These regulations include the EU's ban, announced in May, on restaurants serving olive oil in traditional glass jugs or terracotta bowls (to protect the "image" of olive oil); the prohibition against insurers charging women drivers lower premiums (sexism); and Commission Regulation 2257/94, otherwise known as the "bendy banana" law, which until recently required farmers to discard irregularly shaped bananas (don't ask).

American transnationalists look with admiration on Europe. "Once those laws are passed, EU institutions . . . look over national shoulders to ensure that they actually do what they commit to do," Ms. Slaughter has written. "This European way of law is precisely the role that we postulate for international law generally around the world."

Mr. Kyl is less sanguine. "When your society is regulated to that extent by someone who has no accountability to voters, something is very, very wrong," he says. "The transnationalists should be the last ones lecturing anybody about what ought to be because what is is the U.S. Constitution, which recognizes sovereignty in the American people. That is embedded in everything about our country. It's not outmoded—it's who we are. And if you're not willing to accept that, then you haven't signed on to the most basic notion of what it is to believe about our country."
Posted by DH at 10:05 AM