Even Labor Union Leaders Are Getting It: ObamaCare Is a Disaster 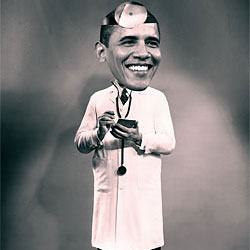 As the reality of Obamacare emerges, a disastrous calamity imposed on the American people, even the most compliant members of the Obama fan club are beginning to panic. Three union presidents have sent Senate Majority Leader Harry Reid and House Minority Leader Nancy Pelosi a scathing letter decrying Obamacare, showing just how out-of-control this law has become. This astonishing reversal has been underreported so far, except by the ever-vigilant Tom Gara in the Wall Street Journal.

The fact is that the crater of Obamacare is getting deeper, with sharper edges. The unions are first-tier political allies of President Obama and the Democratic Party, and it was surely their last resort to put their grievances with Obamacare in writing in the public sphere. A lot must have happened behind the scenes before they felt sufficiently frustrated with the Obama administration to take this step... (From Ed Rogers, "The Insiders: Obamacare is falling apart," an op/ed published in the Washington Post.)

This is a great article indeed to find in the Washington Post. And it's an article that provides you with several terrific talking points to bring up with your Democrat friends.

Like the admission from HHS that you are not, in fact, guaranteed to keep your own doctor or your own insurance...or the labor unions admitting that ObamaCare will likely destroy the 40-hour work week...or that such formerly lockstep Democrats as the Teamsters' James Hoffa are willing to publish in a public letter such paragraphs as this, "We have been strong supporters of the notion that all Americans should have access to quality, affordable health care.  We have also been strong supporters of you.  In campaign after campaign we have put boots on the ground, gone door-to-door to get out the vote, run phone banks and raised money to secure this vision.  Now this vision has come back to haunt us."

Again, do your Democrat friends (and your country) a big favor. Give them a copy of this article. Let them see how the insiders of their own party are realizing what a grand disaster ObamaCare is. It just might make a difference in the way they vote in 2014.
Posted by DH at 10:41 AM