The Democrat Disaster That Is Detroit 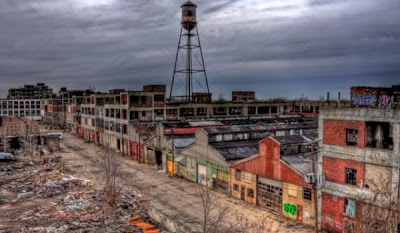 Question: What do you get when you add 1) very high taxes, 2) production jobs going overseas because of greedy, intransigent labor unions, 3) production jobs exchanged for counter-productive Nanny State bureaucrats (who also have greedy, intransigent unions behind them), 4) a monstrously high crime rate exacerbated by 5) a collapsed justice system, and 6) complete dominance by the Democrat Party?

Here are excerpts from the USA Today article, "Detroit: How the Motor City went bust."

Detroit, the once-thriving Midwest metropolis that gave birth to the nation's auto industry, is now the largest city in U.S. history to file for bankruptcy...

• The city's unemployment rate has nearly tripled since 2000 and is more than double the national average.

• The homicide rate is at historically high levels, and the city has been named among America's most dangerous for more than 20 years.

• Detroiters wait an average of 58 minutes for police to respond, compared with the national average of 11 minutes.

The U.S. Bankruptcy Court filing represents perhaps the biggest body blow yet to a faded city that's now home to barely 700,000 — down from a peak of 1.8 million during the auto industry boom years of the 1950s — and struggles to cope with the abandoned buildings and decaying municipal services.

The filing listed more than 100,000 creditors and more than $1 billion in estimated liabilities, but Orr has said Detroit's total financial responsibilities could be as high as $20 billion...
Posted by DH at 9:46 AM