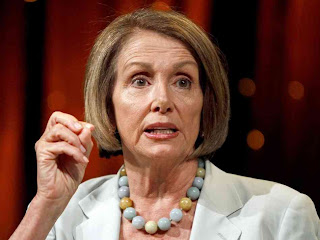 There has been some very weird, wicked and outrageous stuff going on among some of Nancy Pelosi's Democrat colleagues. Think Bob Filner, Anthony Weiner, David Wu, and Eric Massa.

But Rep. Pelosi isn't troubled by the antics of these sexually perverted abusers of women (until she absolutely has to, that is) because she's so busy with the purely invented "war on women" waged by Republicans.

Writes Michelle Malkin, "Whether she's carrying a gavel or just carrying water, Pelosi has served as a loyal apologist and abettor of the Democratic Bad Boys Club. What exactly will it take before voters finally turn this perv protector into a 'former colleague'?"

Read the details in Malkin's illuminating column, "Nancy Pelosi, Creep Enabler" from Town Hall.
Posted by DH at 10:04 AM