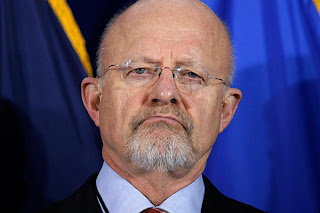 Director of National Intelligence James Clapper is really struggling to explain why he told Congress in March that the National Security Agency does not intentionally collect any kind of data on millions of Americans. His latest take: It's an unfair question, he said, like "When are you going to stop beating your wife?" And it seems to depend on the meaning of "collect."

"I responded in what I thought was the most truthful, or least untruthful, manner by saying 'no,'" Clapper told NBC News on Sunday.

A newly revealed NSA program, however, in which the agency secretly vacuumed up the telephone records of millions of Verizon customers seems to fit the definition of both "data" and "millions of Americans."

Last week, Clapper said his "no" meant that NSA analysts don't read Americans' emails. Some have noted that could explain his earlier answer because "collect" has a precise meaning in intelligence-gathering circles, and it's along those lines.

On Sunday, Clapper elaborated: "This has to do with of course somewhat of a semantic, perhaps some would say too cute by half. But it is—there are honest differences on the semantics of what—when someone says 'collection' to me, that has a specific meaning, which may have a different meaning to him."..

Watching politics in the Obama era is a surreal, maddening...and quite alarming occupation.
Posted by DH at 7:37 AM