NPR: As Extravagant As the Progressive Government It Serves 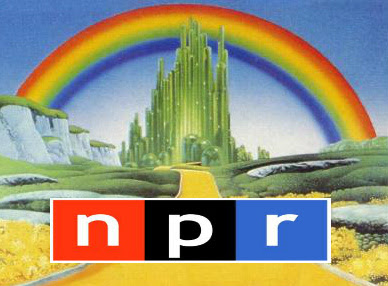 National Public Radio, the ultra-liberal "news and entertainment" organization that could not survive in the rough and tumble competition of the real broadcast business, depends instead upon the generosity of foundations, wealthy contributors, and the American taxpayer.

So how is that money being spent?

In a word, lavishly.

Gary Knell, NPR's Chief Executive Officer, has expensive tastes. That's one thing in your personal life -- Knell was previously the head Muppet over at Sesame Street where he was paid more than $750,000  a year and he's doing quite well in this job too -- but when you're extravagant in spending other people's money, that's something else all together. Especially when your public pose is a begging handout.

But Knell shamelessly took reporters for a tour of the organization's new 400,000 square foot digs yesterday. The day started with an elegant breakfast (free of charge to reporters, of course) served by NPR's resident chefs. Next, Knell showed off the facility's wide open spaces, the balcony around the newsroom, the art, the wellness center "which is capable of simple medical procedures," the gym which is staffed by a professional trainer, and then back to the grand Sound Bites cafe.

Well, Oz was indeed fabulous. And self-aggrandizing. And rather disconnected from the real world. All like NPR.  NPR even has an overpaid fraud at its helm too.

But, of course, there is a very important difference. Oz was a scary nightmare from which Dorothy eventually awoke. NPR's smug, secularist, slanted programming will still be here when we wake up tomorrow morning.
Posted by DH at 9:29 AM