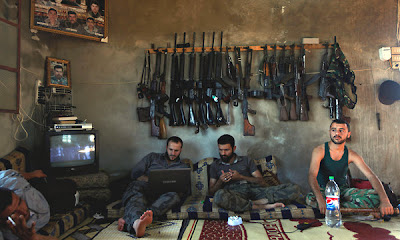 Syria is turning out to be a sort of Spanish Civil War of our age, with Hezbollah and Iran playing the role of fascist Italy and Germany, and the Islamic nations and jihadists that of Stalin’s Russia, as the moderates disappear and the messy conflict becomes a proxy war for greater powers, with worse to come...

Most Americans do not favor intervention of any serious sort, and Obama is not up to drumming up public support. He announced a surge and then simultaneous withdrawals in Afghanistan; since then he rarely mentions the war or the brave Americans stuck there fighting it. A campaign theme was that the United States was all out of Iraq, without a small residual force to keep the Maliki government somewhat honest.

In short, Team Obama does not have its heart in doing much of anything in the Middle East — not in Egypt, Libya, Afghanistan, Iraq, or in the War on Terror in general. Given that the American people have no great love for most of those killing one another in Syria, we would be wise to stay out, and send food and medicine to alleviate the suffering of the innocent.

Read the entirety of "Intervention in Syria Is a Very Bad Idea" by Victor Davis Hanson over at NRO.
Posted by DH at 9:43 AM