Church of England Seeks to be Pagan-Friendly 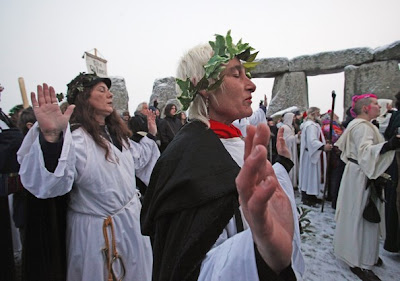 Ministers are being trained to create new forms of Anglicanism suitable for people of alternative beliefs as part of a Church of England drive to retain congregation numbers.

Reverend Steve Hollinghurst, a researcher and adviser in new religious movements told the BBC: “I would be looking to formulate an exploration of the Christian faith that would be at home in their culture.” It would be “almost to create a pagan church where Christianity was very much in the centre.”…

Andrea Campenale, of the Church Mission Society, said: “Nowadays people, they want to feel something; they want to have some sense of experience. We live in reflective England where there’s much more of a focus on ourselves. I think that is something we can bring in dialogue with the Christian society.”

Wow. The Church of England takes the next wild and wacky step into apostasy.

And yet I fear that the trends which now dominate American evangelicalism -- entertainment, the insistence on being part of a popular and hep community, freedom from a careful study of (let alone adherence to) divinely revealed truth, and the continual quest for an emotionally intense, feel-good experience -- are taking us down the very same path.

The NAE Invites Me to a Ron Sider, Jim Wallis and Tony Campolo Party

As If He Wasn't Heterodox Enough, Rob Bell Comes Out for Same-Sex Marriage

“I Don’t Like Those Bible Studies Where They Study the Bible.”