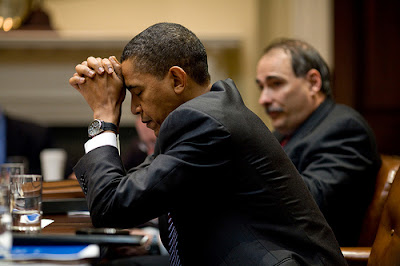 To the discriminating listener, it certainly seems so.

For instance, in trying to establish Obama's innocence in the IRS and AP messes, he ends up portraying the President as ignorant, unconcerned and woefully inept.

“Part of being president is there’s so much beneath you that you can’t know because the government is so vast," Axelrod moaned.

Really? Does that mean that Mr. Axelrod is ready to go Republican now, to decry big government because it is too confused and unwieldy to manage? I don't think so. It's more an acknowledgement that it's just too big for Barack Obama.

Perhaps Mr. Axelrod believes, along with a growing number of Obama voters, that the nation needs a leader with more smarts, more experience, more of a work ethic, more of a team player if we're ever going to get moving in the right direction again.

Axelrod is doing Obama no favors on Benghazi either.  Even many of the hardcore liberals in the press corps accepted the testimony of the Congressional hearing witnesses earlier this week as honest, profound and of tremendous importance in exposing Team Obama as conspirators whose patriotism (and concern for dead Americans) took a back seat to political opportunism.

Yet yesterday Axelrod was still trying to characterize the whole matter as "BS." A few weeks ago, that kind of coarse dismissal of the Benghazi coverup might have been excused as wishful thinking, even self-delusion. But with the evidence which has already piled up, Axelrod's attitude reeks of self-righteous arrogance.

The very kind of arrogance that seems so deeply embedded in the scandals themselves.

No, David is doing Barack (or Hillary) no favors. But then, if the formerly lapdog press decides to pursue these scandals and those others that will inevitably emerge, there's nothing that can save this administration anyhow.
Posted by DH at 11:13 AM