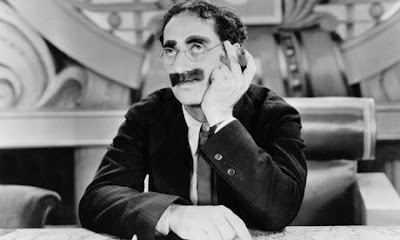 White House press secretary Jay Carney is admitting that several senior White House staff knew of the ongoing investigation into the IRS's targeting of conservative groups before the release of the report from a Treasury Department inspector general. But none of them bothered to mention to Mr. Obama this outrageous subversion of the Constitution nor the mind-numbing scandal that it would inevitably cause if and when it were discovered.

Which is the most frightening possibility here? That Carney is lying through his teeth and the President did know about what was going on, did nothing about it, and is himself lying about it now?

President Rufus T. Firefly, the Groucho Marx character in Duck Soup, comes inevitably to mind. As do his senior advisers, Chico and Harpo.

Of course, whichever of the above two answers turns out to be true (and you don't need me to tell you this), neither one is good for the Republic.
Posted by DH at 12:23 PM