NPR: Lois Lerner Is "The Face of the Scandal" 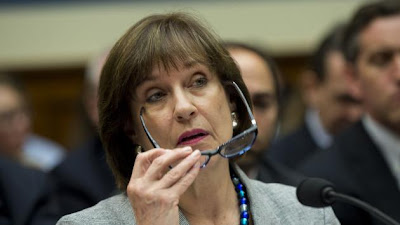 It's not surprising that a story about Lois Lerner's "taking the fifth" at the Congressional hearings yesterday tries several times to cast her in the most positive light possible.

But, in the end, even the NPR writer (Frank James) has to conclude she's in deep trouble. Indeed, with the damning quotation he cites, James skates very close to suggesting she do the right thing; that is, resign.

On the other hand, something recently written by David Cay Johnston, a journalist who knows the IRS better than many people who work there, is exactly the sort of thing she may want to put out of her mind:

"Only a person lacking a sense of honor and integrity would cling to their job in the face of the horrendous damage caused to the agency they work for, to her superiors and to the welfare of the Republic if her mistakes prompt even more IRS budget cuts.

"No one in this century has done more to breed disrespect for our tax system than Lois G. Lerner, undermining the public confidence on which voluntary compliance rests."

It would be hard to find stronger evidence for her having become the face of this scandal than that.
Posted by DH at 8:50 AM