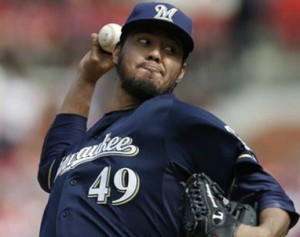 Another baseball player allegedly drove drunk Tuesday. This wasn't just dawdling near the legally acceptable line of intoxication. This was full-blown, God's own drunk, nearly three times the legal limit, the sort of drunk a man can get when the consequences in his state are laughable and those at his workplace nonexistent.

Milwaukee Brewers pitcher Yovani Gallardo will pay the government $778 in fines, or .0001 of his salary this season, for filling himself so full of beer that he blew a 0.22 blood-alcohol level and proceeded to swerve his heavy-duty Ford F-150 in and out of lanes, according to a police report. He could also face a nominal charge from the Brewers for breaking curfew. His penalties will end there...

Simply (and tragically) put, driving drunk is no big deal to law enforcement...at least until someone is maimed or killed.