Yipes! Behind the Scenes of a Michelle Obama's "For the Kids" Event. 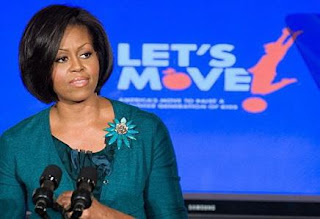 Yet however wonderful and fun this particular event was for the press and the First Lady, it was hellish for the kids and teachers. Read on.

In a bit of grim irony, the implementation of this program has been a teachable moment in Big Government stasis and ruling-class arrogance…

“This event was clearly not about the children, because their needs were not put first,” Putnam concludes, wandering so far off the political reservation that she runs the risk of encountering Bob Woodward in the wild.  ”Politics and big business before children; was this event an eerie foreshadowing of what is to come for education in Chicago?”

I’m tempted to conclude with a simple “yes,” or perhaps a saucy Bruce Willis quote: “Welcome to the party, pal.”  But really, this sort of thing is entirely typical of Big Government bureaucracy, and it really should be presented to children and adults alike as a teachable moment.  The further authority is removed from the people who suffer beneath it, the more likely that common sense will be abandoned, and people will find themselves treated like rats in a maze.  (No one involved in planning this disaster realized what the interminable waiting and deprivation inflicted on the young participants would do to them?  Really?)  If Ms. Putnam and her associates were given a modest budget and tasked with designing a weekend program to get their students excited about exercise and proper diet, they almost certainly would have come up with something far more fun and productive than this Kafkaesque nightmare.

Come to think of it, is it too early to introduce these kids to Kafka, Orwell, and Huxley?  That would be a way to build off this experience and prepare them for life under ObamaCare and other bureaucratic horrors.  They signed up for a crusade against childhood obesity, but instead they received a useful lesson in one of the education establishment’s previous obsessions: bullying.
Posted by DH at 9:37 AM