She Voted 6 Times...But It's Okay. She Voted Democrat. 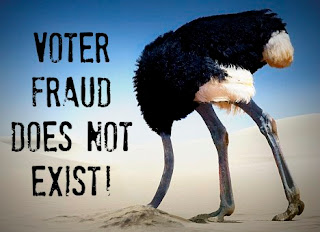 Law, fairness, honesty -- none of these things matter much. Not as long as you're heart is in the right place; that is, if you're working to build up even further the power of the Caring, Comprehensive Nanny State as constructed by such supermen as Barack Obama.

Thus, Melowese Richardson doesn't deny that she voted twice in the presidential election last November. But apparently she did it because Obama deserves faithful, enthusiastic followers like her.  So yes, she voted twice but there "was no intent on my part to commit any voter fraud."

Ignorance is an intriguingly bold defense in this case. Ask any second-grade kid about fairness in an election and she'll explain the one-person, one-vote principle. But Melowese Richardson isn't a second-grade kid. She's 58 years old and a veteran poll worker!

And then there's this -- it turns out that Richardson didn't just cast one extra vote. She voted at least 6 times! And she's done it in other elections too!

But again, it ain't wrong because it was all done in good faith and for a superior cause. Said Richardson after being confronted with the charges of vote fraud, "I'll fight it for Mr. Obama and Mr. Obama's right to sit as president of the United States."

P.S. It's more than interesting to note that although the evidence is overwhelming that voter fraud is a major problem...and that almost all of it in the modern era involves Democrat voters and organizations trying to stuff the ballot boxes of Democrat candidates, an internet search of the topic (words and images) is dominated by denials, mockery and wildly inaccurate conspiracy stories about George Bush and Florida.