It Ain't Your Grandpa's Bronze Star 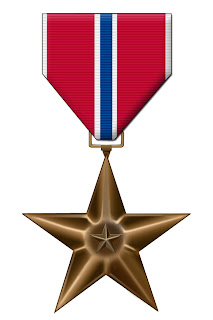 The U.S. Air Force has been criticized before for awarding Bronze Stars too generously.  You may remember the flap during the Clinton administration when the Air Force gave 185 Bronze Star Medals connected with military operations in Kosovo in 1999. This raised some eyebrows since the Navy gave out only 69 and the Army gave out none. (The Army's troops were across the border in Albania but they were considered being in the combat zone.)

Then last year, the Air Force went public with the story of how two women (female finance staff from medical units in Afghanistan who were awarded the medals for meritorious non-combat service) had allegedly been "cyber-bullied" from those who believed the women didn't deserve them. The resulting debate caused the Air Force to pull back…a little. But they still maintained that meritorious service awards of the Bronze Star would outnumber valor awards.

Which brings us to Air National Guard Chaplain Lieutenant Colonel Jon Trainer who has recently been awarded the Bronze Star for creating a Muslim-friendly Power Point presentation. No kidding.

From a Dayton Daily News story which is printed under the headline, "Local Chaplain Played Vital Role in War," we learn that:

For his effort, Lt. Col. Jon Trainer received the prestigious Bronze Star — a medal given for heroic or meritorious achievement in connection with operations against an armed enemy.

And he did it with a PowerPoint presentation.

Trainer, who’s now in the running to be named Chaplain of the Year for the entire Air Guard, was in the third month of his voluntary deployment to Afghanistan last February when U.S. troops at Bagram Airfield mistakenly burned copies of the Muslim holy book.

Within 48 hours, Trainer developed a PowerPoint presentation on the proper handling and disposal of Islamic religious material that was seen by every American — military and civilian alike — in Afghanistan. The presentation then was distributed to the U.S. for use in all pre-deployment training...

Trainer, a Westerville resident and nondenominational Christian pastor who’s been chaplain of the local 251st Cyber Engineering Installation Group since 2000, also sought to prevent any future problems by covering what constitutes Islamic religious material in the first place.

“When a Muslim writes down even a few verses from the Quran on a piece of paper,” he explained, “that immediately gets that same protected status.”

Ultimately, he said, it became an opportunity to demonstrate the importance of culture to U.S. troops and to show Afghanis that the U.S. could respond swiftly to their sensitivities...

A "vital role in war?" A Bronze Star? I can't help but wonder what Audie Murphy (another Bronze Medal winner) would think.
Posted by DH at 12:02 PM