86-Year Old Sniper Takes the Shot of a Lifetime 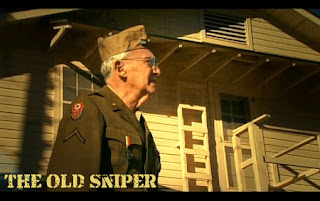 This video clip is just too cool.

Be moved and inspired by then 86-year old Ted Gundy (a WW II sniper) as he is awarded the coveted "black hat" from current members of the U. S. Army Marksmanship Unit. And then watch Gundy's performance as he himself gets on the firing line -- first shooting at a target 100 yards away using a replica of his WW II rifle and then going after an "impossible dream" shot.

And did I already mention that this video clip is just too cool?

(This clip was originally broadcast on an episode of Shooting USA which aired on the Outdoor Channel back in February 2010. Here's a bit more .)
Posted by DH at 10:18 AM