Hey, Look at Michelle at the Oscars...Not at What Barack Is Doing to the Republic. 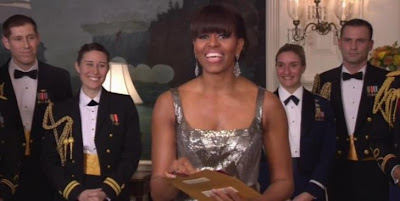 Michelle Obama's appearance at the Oscars, like all the rest of the First Couple's glitzy and glamorous doings, are eagerly lapped up by America's fawning press. Therefore, even if Michelle's typically self-centered intrusion (it's all about us, darling) seemed awkward and over-the-top partisan (can you imagine the outcry had Ronald Reagan or Laura Bush ever shown up at the soiree?), the media is dominated today by caressing coverage of Lady O and her silver gown.

So why do they do it? Why do the press and the White House engage in such grandstand plays?

To keep the American public from thinking about "inconvenient" things like these:

* During Barack Obama's years in office, real federal spending has increased $2,437 per household.

* Retailers are preparing for a triple whammy as the restoration of the payroll tax, surging gas prices, and stagnant employment and wages take a bite out of consumers’ disposable income, leaving them with less cash to spend on clothing, groceries, and eating out. As a result, more than three years after the recession officially ended, American consumers might be preparing to downshift again, if only slightly, with low-income consumers hit the hardest…

* Obama's lies about the sequester are being noted -- even by Bob Woodward!

* Transparency? Forget about it. -- Barack Obama's former White House Press Secretary Robert Gibbs has admitted that he had been ordered to never acknowledge the existence of the drone program. He went further to say that  the Obama administration’s denial of the program “undermines people’s confidence overall in the decisions that their government makes.” (Now he tells us.)

* Regarding what Democrat economics produces. Well, actually, what it fails to produce. -- Confiscatory taxes are causing businesses to run away from Democrat-controlled states. Here's just one case in point.

* ObamaCare fallout -- Whether you're employed and insured, elderly and on Medicare, or poor and covered by Medicaid, the Florida Medical Association says there's a growing shortage of doctors — especially specialists — available to provide you with medical care...

* The story out of Florida about a massive vote fraud scheme.

* Racial healing? Louis Farrakhan -- "All you gangbangers, we know you love to shoot, but you're killing yourselves. All your weapons are illegal and you're using them like savages." But Farrakhan said gangbangers are "natural soldiers" and could be taught "the science of war" to become protectors of the Nation of Islam's assets in the future.

By the way, not all journalists were wowed by Lady O's appearance. Here's Christian Toto's take from over at Breitbart and check out Jennifer Rubin's Washington Post column here.