Another Goodbye to a "When Swing Was King" Friend 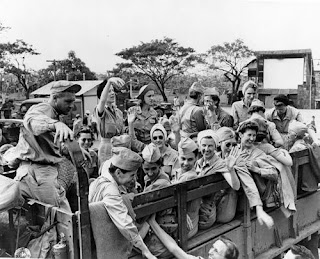 I had been speaking for awhile to Herbert, a World War II veteran who had done his share of jungle fighting in the island battles of the Pacific theater.  Next in the line going out the door was Helen.  “I was an Army nurse in the Pacific,” she told me with a smile of pride.  Then she nodded towards Herbert as he ambled down the hall with a walker.  “It was our job to take care of those boys and do our best to see they made it back home.”

I was touched at how she included this elderly gentleman, nearing 90 if not even older, as one of "those boys.”  She well knew that her efforts all those decades ago had helped make possible innumerable miracles for so many lives – miracles that would otherwise have been lost in the loneliness of those military hospitals so far away from home.

That incident occurred a couple of years ago. It was the first time that we met Helen but she quickly became one of our most enthusiastic fans of “When Swing Was King.” She never missed a show…nor did she ever miss a chance to express her gratitude for us bringing along the music, conversation and memories.  We really enjoyed her friendship.

But last month we noticed she had an ugly bruise on her face.  It was the result of a fall she had taken – a fall she had no memory of.  Still, she was her usual chipper self, tapping her fingers and feet to the music of Artie Shaw, Benny Goodman, Chick Webb, and the rest.  And thanking us profusely for providing her and the others with "the very best program they have here!"

It was the last time we saw her.  We were told that, after that fall, Helen's health had deteriorated rapidly and she passed away just a couple of days before our next visit.

Thank you for your service, Helen, to our country and to “those boys.”  And thanks so much for sharing your warm friendship with Claire and me. We will miss you very much.
Posted by DH at 1:42 PM