Drinks All Around Except for the Republican! 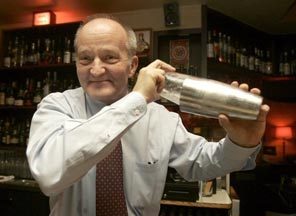 The night of the election, a labor union rep walks into a fairly crowded bar that's right across the street from a closed shop factory. He's about to order a drink to celebrate Obama’s victory when he sees a guy sitting near the bar working on his laptop and wearing a Romney for President button. Just seeing the guy ticks him off and he decides to put him in his place. So, he shouts over to the bartender loudly enough that everyone can hear, "Bartender, drinks for everyone in here, except for that %#^&@ Republican!"

Soon after the drinks have been handed out, the Republican gives him a big smile, waves at him and says in an equally loud voice, "Thank you!"

This infuriates the union rep and so he again orders the bartender to pour drinks for everyone in the bar except the %#^&@ Republican. But again, this doesn't seem to bother the Republican at all. Indeed, he continues to smile and again yells out to the union rep, "Thank you!"

The union man is really steaming by this time and he turns to the bartender. "What's the deal with that Republican? I've ordered three rounds of drinks for every single bum in here except him and yet all he does is smile and thank me. Is he drunk or just plain stupid?"

"Neither one," replies the bartender. "He owns the place."

(Original joke told by Dan Sorkin and passed along by Lee Rodgers. I'm afraid I've played with it a little.)
Posted by DH at 10:39 AM