On Voter Fraud, Vandalism and the Decline of Civil Engagement

My friend from the Pacific Northwest, Jack Niewold, is a fellow I have relentlessly urged to start his own blog. After all, he's a well-read, bold and insightful Christian gentleman who writes remarkably well and his book, Frail Web of Intention, was one of the most provocative books I've read in the last couple of years.

I know that a regular blog hosted by Jack would reach many more readers, readers who would appreciate and benefit from his stimulating commentary on religion, culture, and other adventures of life.

But until I persuade him to visit Blogger and take the ten minutes necessary to set up that blog, I'll have to settle on periodically bringing you samples of Jack's Facebook entries. Like this one... 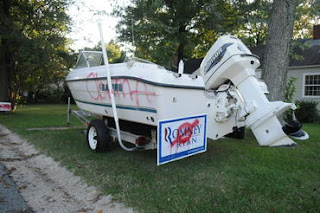 Most of the voter fraud and political vandalism that is in the media today is perpetrated by the Left. That is to say, members of the Democratic Party. The case of Jim Moran's son in Maryland and the hoax letter in Florida are but the latest examples.

Of course not all Democrats are criminals, but most political criminals are Democrats. When I lived in the Bay Area, I had my home and cars defaced while displaying Republican signs, and once, when I had a Bruce Herschensohn bumper sticker on my car, I was chased down and threatened when driving through Hayward.

There is no question in my mind that the liberal mindset is an authoritarian mindset, and that it views democracy as something only to be used, as opposed to something to be cherished as an end in itself.

Given the chance--in view of union card check, campus speech codes, and hate crime legislation (among other heavy-handed tactics)--the liberal tendency is to silence and outlaw opposition rather than contest it in the framework of law and public debate.

I'm sorry the once-great Democrat Party has come to this, but we have to face the fact that only one of the political parties is, in the best sense, "democratic."