What a Week for "When Swing Was King" 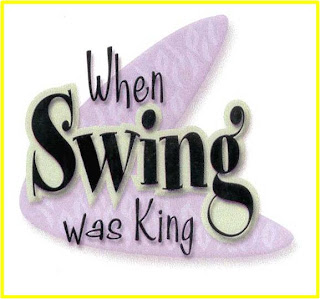 This week is certainly a big one for our "When Swing Was King" outreach. Why? 1) Because we have 5 of them scheduled -- one for each day of the week. 2) Because we're debuting at a brand new nursing home and 3) Because Vital Signs hosted a special showing of "When Swing Was King" to about 50 of our supporters, several of whom brought along photos from their own family history for us to incorporate in the program.

The pie social was held Monday night at Hope Church at 93rd and Maple. Because of the size of the room we had rented there (and because of the special purposes of the evening), we had not made it an open event like we usually do. Rather we sent out special invitations to those on our mailing list who are local and who are regular financial supporters of Vital Signs Ministries. We had almost the perfect number -- just right for the room and for the number of photo scanners we had in operation.

Most of those in attendance had heard a lot about our "When Swing Was King" ministry but few had actually "experienced" it and, man alive, were we touched by their enthusiastic complements! As a personal encouragement to Claire and I, it was really great. And, just as important, was the evening's direct help in making "When Swing Was King" even better through an influx of old photos.

About a dozen individuals and families provided us with photos from their family history of the 1930s, 1940s and 1950s. Claire, Kurt, Keith and Steve all had scanners going to make copies of those pictures which were eventually transferred to Claire's computer. By the time the smoke cleared, we had over 150 great photos! Plus, we will be scanning yet more from other friends in the weeks to come. Who knows? Maybe we'll be getting help from some of you! Just give us a call.

Another highlight of this big "When Swing Was King" week" came yesterday when we debuted at a brand new place -- Brighton Gardens. We had an exceptional time. The first positive was that the place was well set up when we arrived. That's not always the case. We often have to play furniture movers before we play anything else! We were then warmly received by the Activities Director and received maximum cooperation from the rest of the staff too. Again, that's not a given.

There were a few residents already waiting for us but, as we set up our equipment, many more sauntered in, including a sizable group led in by staff from the Alzheimer's unit. By the time we started our first tune (always a Glenn Miller song), we had 30 or more involved. That's a terrific number.  And their response to the music and photos was wonderful. My introduction to almost every song triggered oohs and ahs, signalling both recognition and appreciation, and every song was applauded at the end. Along the way, we had several people joining in song, especially three of the ladies from the Alzheimer's unit. Our visits with residents following the program confirmed our hopes. It was a very enthusiastic reception with both residents and staff making strong appeals for us to come their way every month.

Well, well. What to do? We had recently cut one of the nursing homes from our schedule because of consistent problems with the staff there. With that place crossed off then, we decided we had room to say yes to this new request.  That means we are now back to 11 "When Swing Was King" presentations every month. And a 12th every once in awhile up in Blair. And another regular one maybe in the works.

As always, we direct you to the monthly schedule for "When Swing Was King" found at the Vital Signs Ministries web site if you'd like to come be a part of the ministry.