Think These Kids Can Make It In the Pros? 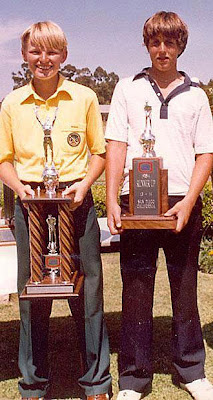 Can you guess who the kids in this photo are?

Actually, if you watch golf, it's not a very hard test because the men that these boys grew up to be (now in their forties) still retain their boyish features.

Give up? They are Ernie Els and Phil Mickelson. And the photo was taken after the 1984 World Junior Championship at Torrey Pines where the 15-year old Ernie had just won over the 14-year old Phil.

But don't feel too sorry for Phil. He'd get back at his South African friend 20 years later with a dramatic putt that gave him a one-stroke victory over Ernie...at the Masters.

As a matter of fact, both of these kids have had sterling careers. Both men have already been inducted into the World Golf Hall of Fame. Both have won four major titles. And both are wealthy beyond their dreams. Phil, for instance,  has earned $66.4 million just in prize money from the PGA Tour. He's made a lot more than that through endorsements. Ernie hasn't fared too badly either. He's earned $44.5 million on the tour alone. 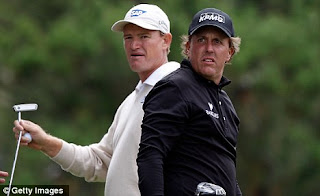 Both men have known trouble in their lives -- Phil's wife going through cancer and Ernie's son dealing with autism. Also, both golfers are generous and very active in giving back to the community. Phil's charitable work has found an awful lot of benefactors but he would probably point first to the Phil & Amy Mickelson Foundation through which they support numerous initiatives. Ernie's charities center on the Ernie Els and Fancourt Foundation and the Els for Autism Golf Challenge.

For me, looking at the photo of Ernie and Phil as boys reminds me of the adventure, the promise, and the challenge which life presents. And not just to people who eventually become celebrities, but to us all. And it reminds me too of life's brevity. It does go very fast.

That's all the more reason to dream big, work hard and lean into the grace and power offered by God through Christ. For with that foundation, anyone can be a great success.
Posted by DH at 10:28 AM