Amsterdam Police to Prostitutes: Cover It Up a Bit Before Selling It. 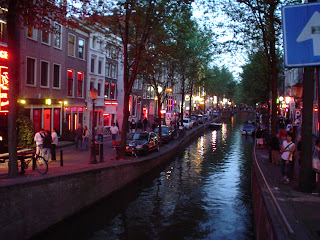 Here's news that Amsterdam police are going to start enforcing a dress code...for the city's prostitutes.

And you thought modesty was a thing of the past.

Now don't get the wrong idea. Amsterdam Mayor Daniel Termont is a progressive fellow who doesn't have a problem with prostitutes. Indeed, His Honor insists, "I'm not a puritan. Far from it! A city like Ghent needs prostitutes, but they have to respect certain rules."

But does a city really "need" prostitutes?

And whence cometh these "certain rules" the mayor is talking about? If prostitution and other sexual perversion is approved, protected, even promoted by the Amsterdam city officials -- and it is -- does talking about any rules of morality make sense?