Why Would a Christian Vote for a Mormon President? 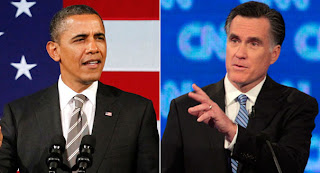 "Denny, from previous posts on your blog I can see that you are not thrilled at the prospect of Mitt Romney being the Republican nominee for President. Is that mainly because he is a Mormon? Does that mean you'll be voting for someone else this time around or just not vote at all?"

That was the gist of a question that was waiting for me when I logged on to the computer this morning. I sent a quick reply to that question but I then figured it would be appropriate to develop it a little further and present it here. So, here's that extended answer.

Yes, I remain appalled that the standard bearer for the Republican Party is a practicing Mormon. Mormonism is not only a cult (a religious system that claims connections to Jesus and the Bible while yet denying essential doctrines of Christianity), but it is a particularly anti-historical and silly cult. That Mr. Romney buys into golden tablets, lost civilizations, holy underwear, spirit babies, and the hopes of the faithful to be 'Jesus replicas' on their own planets is, at the very least, disconcerting.

But then Romney didn't applaud Jeremiah Wright's anti-American sermons for years nor create a mishmash religion of his own from Islam, liberal Christianity, and Saul Alinsky.

I believe Romney's position as the G.O.P. nominee says much about the general retreat of evangelicals and conservative Catholics from the political arena AND the domination of the leftist media in the selection process which goes all out to ignore, distort, mock and vilify the best candidates.

But let's remember this hard fact: Mitt Romney is running for President against Democrat Barack Obama. And let me state plainly here the five greatest reasons Barack Obama should be opposed.

1) I consider Barack Obama the most dangerous political power of our time, a man unswervingly dedicated to remaking America into a socialist/secularist nation that is woefully ill-prepared to defend herself (let alone the cause of freedom in the world). Furthermore, 2) Barack Obama is committed to using coercive police powers to repress freedoms of religion, speech, and assembly. 3) He is intent on ignoring the Constitution's balance of powers in order to make the Executive branch (with its armies of bureaucrats and clerks) a near totalitarian power. 4) He is committed to a socialistic philosophy that will further ruin America's economy and bring in untold misery. And 5) Barack Obama is brazenly zealous to destroy the very concepts of sanctity of life, the natural family, sexual morality, fairness, and moral honor.

I shudder over the horrible damage done to the United States by this would-be despot over the last four years. But I fear the damage will be irreversible (and, quite probably, fatal) if he remains in charge another four years.

Imagine the effect of Obama's czars, his Executive Orders, his appointments to the Supreme Court and all other federal courts, his further dismantling of America's economy and national defense, his industrious efforts to force Christianity into a closet...if he has another 4 years.

So, I repeat; I'm not at all pleased that Mitt Romney will be the Republican nominee for President of the United States. I would have much preferred Rick Perry or Michelle Bachmann or Paul Ryan or Marco Rubio or Tom Coburn or Chris Smith or Bobby Jindal or Sarah Palin or Rick Santorum or Allen West or Jeff Fortenberry or any of several others.

But will I sit this election out because of the Republican's poor choice?

Nor will I be voting for a third party candidate which, for all practical purposes, would be the same thing.

Because I truly believe that another four years of President Barack Obama would be profoundly disastrous for America, the cause of justice, and the freedom of religion...this registered Independent will be voting for the Republican ticket.
Posted by DH at 10:00 AM