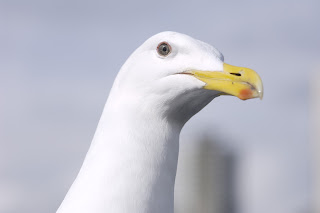 I wouldn't have thought that seagulls would have much to do with whales, let alone present a serious threat to them. But that's just what they are doing off the coast of Argentina.

So much so that the country has directed cops to start shooting the seagulls in hopes of driving them off.

Seagulls off the coast of the Patagonian city of Puerto Madryn have discovered that by pecking at the whales as they come up for air they can create open wounds. Each time the whales then surface gulls swoop down and cut away skin and blubber with their beaks and claws…

Whales are also changing their behaviour in response to the attacks. Instead of breaching the water and dramatically displaying their tails, they rise just barely enough to breathe through their blow-holes before descending to safety.

Authorities believe that killing the seagulls will thus protect the whales and, of course, protect also the profits derived from tourists who pay handsomely to watch the sporting, spouting whales in their breeding grounds there in the Atlantic.

Those options are much more practical. After all, does anyone really believe the police could shoot enough of the predators to drive the rest off? And, if they were to undertake the plan in earnest, the boatloads of policemen banging away with shotguns would certainly be as much of a deterrent to the whales than the biting birds.

But then again, maybe the authorities are laying the groundwork for a whole new tourist attraction.
Posted by DH at 10:04 AM