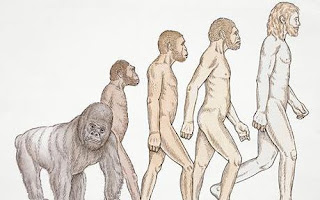 "I suppose the reason is that paleontology is a rather data-poor science. There are probably more paleontologists than there are important fossils in the world. To make a name for yourself is to find a new interpretation for those fossils that are extant. This always goes against some earlier person's interpretation, who will not like it very much. . . . It's almost like social anthropology or politics—you can only win by somehow yelling louder than the other person or sounding more convincing."

The above comments are from Svante Pääbo, a Neanderthal genome researcher. He is quoted by Denyse O'Leary in an interesting little article over at Salvo Magazine about the difficulties (and desperation) in trying to find the "missing link." The article emphasizes how science is too often about ego, ideology, group think, and political correctness rather being about scientific fact. Check it out.
Posted by DH at 8:57 AM