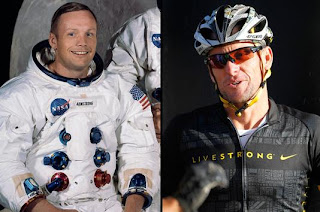 From the e-mail newsletter sent to fans of MercatorNet, it's editor Michael Cook ponders the lessons learned this week from two different Armstrongs.

Whenever we looked at the moon in this last couple of days, it was hard to forget that the first man to walk there died on Saturday at the age of 82. JFK had made a vow in 1961 of "achieving the goal, before the decade is out, of landing a man on the Moon and returning him safely to Earth." Five months before the deadline Neil Armstrong hopped gingerly onto the Sea of Tranquillity and said, "That's one small step for man, one giant leap for mankind".

One day in 1969 changed Armstrong's life, as NASA knew it would. He became an international celebrity, his opinion sought on every topic under the sun. But he hid behind a stoic modesty, never boasting, never taking advantage of his fame. He was content to "bask in obscurity".

Neil brought his own qualities to the job - courage, nerves of steel, an icy calm - but he put the team first. "When you have hundreds of thousands of people all doing their job a little better than they have to," he reminisced, "you get an improvement in performance. And that's the only reason we could have pulled this whole thing off."

Then there is the other Armstrong, Lance, who departed from cycling for ever, in disgrace last Friday. He won seven consecutive Tours de France and a bronze in the 2000 Olympics, but now he forfeits everything he won since August 1, 1998 after declining to defend himself against doping charges. Worse than breaking the rules were the lies told to shield himself from years of allegations. He even used the allegations to inflate his reputation. A famous Nike advertisement  -- "what am I on? I'm on my bike..." - makes sad viewing.

It's a reminder that humility, or at least modesty, is the stuff of heroes. The most important thing is doing your job, doing it well, and supporting the team. Not coming first...
Posted by DH at 10:56 AM